Archive for the ‘Emotions’ Category 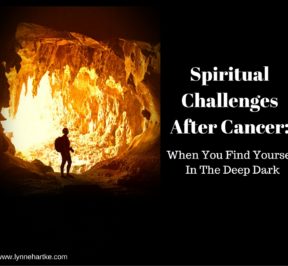 When You Find Yourself in the Deep Dark

Final post in a series on Life After Cancer.

When my husband was in college, he and a group of friends went spelunking in an undeveloped cave near Columbia, Missouri called Devil’s Icebox.

Unbeknownst to them, while they spent hours exploring the the 6.25 miles of underground passages, it had started raining. When they attempted to return to the entrance, through a narrow tunnel where they had to meander like snakes on their bellies, they noticed the water was rising.

The only place to gasp for air was when there was a break in the rocks in the ceiling. An air pocket. In the scramble to get out of the narrow section and save their lives, all the lights in their carbide head lamps got drenched.

END_OF_DOCUMENT_TOKEN_TO_BE_REPLACED 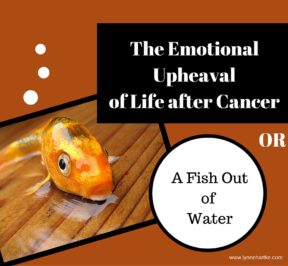 The Emotional Upheaval After Cancer or A Fish Out of Water

After cancer treatment, many survivors feel like a fish out of water, on the outside looking in, with emotions all over the place. How do you fit into life again?  This is the third in a series on Life After Cancer.

“I had a wedding to attend in Las Vegas,” Denise wrote when I asked her about the emotional changes and losses of life after cancer. “I was determined to attend. The wedding was for a daughter of a dear childhood friend. The date was circled, labeled and engraved in stone. The good news is that I made it to the wedding, but it was a challenge. Probably more mental, than physical. I had about 1/4 inch of hair, boyish looking and the ugliest slate-gray EVER since I wasn’t allowed to color it yet.”

“I found a dress; it was okay, but having lost ten pounds [from treatment], I just didn’t even feel like I looked good at all! At the reception, I can remember feeling like a ‘fish out of water.’”

END_OF_DOCUMENT_TOKEN_TO_BE_REPLACED

“I’m sitting at the doctor’s office for a check up and came across this picture as I wait. I can’t believe that is was over a year ago. I was just finishing my 5th round of chemo, barely any hair on my head and soon to deliver our little Lilian. It feels sometimes like that wasn’t my life, that surely at age 30 I couldn’t have gotten breast cancer. The last two years have been hard. So hard. I have felt indescribable exhaustion and huge waves of fear that my cancer could return. But above all of that I have seen the strength & courage that God placed in my soul. I have seen unwavering support from everyone around me and have gained the most beautiful gift of all, a new perspective. Thank you to those who continue to walk side by side with me.”‪#‎pregnantwithcancer‬ ‪#‎youngbreastcancer‬

Caitlin (with Lilian on board)

For the Luck of Cancer?

If you were to see the scars that rest on my now flattened chest you might not consider me lucky, but you are not looking deep enough.

If you were to watch me climb out of bed each morning stiff from the medicine that continues to keep the stalker at bay you would not consider me lucky, but you are still not looking deep enough. END_OF_DOCUMENT_TOKEN_TO_BE_REPLACED

Your relationships are about to change. All of them. Some will get stronger. They will probably not be with the people you would expect. The people you want to handle this well might not be able to for a variety of reasons. Some of the reasons will be selfish. Some of them will be entirely innocent and circumstantial. All of them will be forgivable because no one plans for cancer. Carrying bitterness or anger won’t help your recovery. Fighting for anyone to stick with you won’t cure you. Those who can, will. END_OF_DOCUMENT_TOKEN_TO_BE_REPLACED

But now what? I look “normal” to you. I “seem” like I have good energy. I am acting pretty close to the way I used to, or so it seems. I may be back to work or back to the regular routine I had with the kids before cancer hit.

But guess what? I have a secret to share with you. END_OF_DOCUMENT_TOKEN_TO_BE_REPLACED

After we’re diagnosed, all of us experience “losing” friends to cancer.  The following article explains why the people we “think” will be by our side might not be during cancer …. and why others we never expected take their place beside us.

I Lost a Friend Today

I lost an old friend this week. Not in the idiomatic sense that he passed away, nor in the literal sense that I misplaced him in a crowded supermarket and never found my way back to him. Although, metaphorically, perhaps that’s exactly what happened: we lost each other in the crowded supermarket of life, and by the time we realized we’d gone astray, there were just too many aisles and trolleys and shelves of tinned goods to find our way back. Of course, if I hadn’t been pushing a wheelchair maybe I’d have been able to keep up a bit better. END_OF_DOCUMENT_TOKEN_TO_BE_REPLACED

People with cancer are supposed to be heroic.

We fight a disease that terrifies everyone.

We are strong because we endure treatments that can feel worse than the actual malignancies.

We are brave because our lab tests come back with news we don’t want to hear.

The reality of life with cancer is very different from the image we try to portray. END_OF_DOCUMENT_TOKEN_TO_BE_REPLACED